Last night thieves tried to break into a bike shop in Cannington, WA. Cleargard’s high-security film and anchoring system prevented them from access.  As you can see from the picture here, several attempts were made to shatter the corner of the glass however the protective film held it firmly in place and prevented damage and losses. 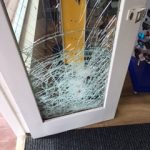